This Could Get Weird

This Was Worth It

For the first time, I was looking through a movie catalog system, that just so happens to begin with the letter "N", and I stumbled across a Romero film that, for the love of all that is holy, I had not seen!!!! I know, hard to think that someone who claims to be infatuated with the undead HASN'T seen all of Romero's films! Here's a little secret you may not know about me, that only my closest of friends and family do...get ready for it....

Not just that, the idea of watching your loved ones become flesh eaters or just maybe your children! Ok, so maybe I tend to get a little over excited and jumpy when watching a Z-Flick. It's only a little humorous but talk about an adrenaline rush!

The movie was Day of the Dead. Pretty good cast, especially Vingh Rames! Decent acting at least, can't say say the same for the graphics...anyway the plot...the storyline is what brought back a familiar idea that I rarely think upon, only because it takes days to get out of my head (laughing at self nervously).

Government conspiracy theory. Testing in an undisclosed area that turns out to be not as secure as one imagined. Virus gets out...we become the test subjects.

Tell me I'm just over imaginative but...possibility?
Posted by Molly at 11:13 PM No comments:

Uh, hi...my name's Molly and well, I'm addicted to zombies!
Sorry about the delay fellow Fleshie Fanatics of Fantastica. Coming soon to an FA near you:

For Legal reasons I would like to state that I, in no way, condone the practices of Voodoo for the ritual of zombification as it is rumored illegal in said country above. That being noted: Welcome to your lesson on how to create a hypothetical/literal zombie, or kill a man trying!
Zombie: spirit of a dead person; a dead body that has been brought back to life by a supernatural force; a slow moving person of very little intelligence; a person who appears to be lifeless, apathetic, or totally lacking in independent judgement; one who thinks like an automaton.
The word zombie brings about a much different meaning in other regions of the world, mostly Caribbean. The basis of zombification relates to one who is not in control of ones self. Mind, body and often spirit. The Haitian people know of this all too well.
Voodoo: a religion involving witchcraft and communication by trance with ancestors and animistic deities. Commonly practiced in Caribbean islands. Also known as Vodun and many other terms.
For the purpose of this lesson, here on out it will be referenced as Vodun. Medial influences aside, Voodoo is a scary practice to those who know very little of it...that makes this all the more fun!
You may want to Google this next part to prove it's truth. Vodun has a link to Roman Catholicism...really! What I cannot find is any source that is a legal document stating that creating a zombie in Haiti is illegal...however there are many sites that "live" by this statement. Therefore I will post such article for you to see....
Haitian Penal Code, Article 249: It shall also be qualified as attempted murder the employment which may be made against any person of substances which, without causing actual death, produce a lethargic coma more or less prolonged. If, after the person has been buried, the act shall be considered murder no matter what result follows.
The only other statement found was actually in the Constitution of Haiti, Section D.
Article 30: All religions and faiths shall be freely exercised. Everyone is entitled to profess his religion and practice his faith provided the exercise of that right does not disturb law and order.
Now that makes sense. It is however common knowledge that there are/were human-zombies residing (as much as they can reside while dead to the world) in Haiti. In some parts of the country they are "created" for workforce labor...Which parts are unknown to myself.
Zombification in Haiti was originally portrayed as an act against someone who has wronged you in a manner not punishable by law. Therefore taking your problem to a bokur would bring justice to your dispute. It slightly resembles the handling of a situation by the mafia. I can see how this would be illegal.
To cut to the chase, there are just a few ingredients to the recipe for making someone your slave.
"Three classes of ingredients were common to all the preparations: 1) charred and ground bones and other human remains, 2) plants with urticating hairs, spines, toxic resins, or calcium oxalate crystals,  and 3) puffer fish." Sounds about as bad as making a souffle. Tetrodotoxin is the poison found in the puffer fish near the reproductive organs. "Symptoms of tetrodotoxin poisoning include malaise, paraesthesias, cyanosis of the lips, digestive disorders, pulmonary edema, hypothermia, respiratory difficulties, hypotension, aphonia, and complete paralysis" Thus creating the illusion of being dead, what with purple lips and slowed breathing, and lack of any bodily control. If "lucky" in this case, the person will be unable to argue with you about the next process in which you take over their mind. Certain amounts of hemlock can be substituted sometimes. A very specific plant is needed for the next phase. Datura stramonium, also commonly known as jimson weed, devil's trumpet, devil's weed, thorn apple, tolguacha, Jamestown weed, stinkweed, locoweed, datura, and moonflower. All apart of the nightshade family. Just pay attention to the 'weed' you get. The grinding of any of the parts of this plant takes on the toxicity, if not more lethal, of the poisonous truffle (mushroom) and has a more serious effect. The inductee then has all will beaten out of them and tortured until they believe that the tormentor is their master thus being unable to do anything but what is told to them to do. This lasts about 48 hours. Sleep depravity and halucination goes perfect together since prior to this occasion the person was buried alive and dug up by a stranger.

Tell me that after experiencing such traumatic events that you would or could do any different. With your family accepting the fact that you are dead, in the ground, and not a soul to believe that you have risen, if you were to be seen by public eye, from the grave to be a slave to a master...where would you go or what would you do to convince them? Would you, if given the free will to speak for yourself again, jeopardize the sanity of your loved ones just to be cast out into the darkness again? "But I thought that when you were buried, you couldn't come back?" Serpent and the Rainbow, people. Serpent and the Rainbow. Anything is possible.
Posted by Molly at 9:28 AM No comments:

In any event, a huge THANK YOU to all who took time out of their day to view and follow my page. Promises of more blogs to come are in order as well. Give me a few days to collect my thoughts and do my research and beg google not to drop me like a bad habit for not getting enough clicks and you shall have your horror stories in hand...much thanks. Don't give up on me!
Molly Z
Posted by Molly at 10:44 AM No comments:

If I Were Dead, What Would I Be?

Not many people have what it takes to let their imagination get the best of them. It just takes one thought, one minute of dreaming the impossible and the next minute you find yourself in a whole new world of determination to find what makes the world go round or stop in my case... So for just a second, think about what it would be like to be dead...or undead! What would you do in the event of an apocalypse in which the ones you love, or don't, began to see you as a midnight snack...? How would you survive? What kind of undead would you be? Would the quickening really stop the change? Just stop and let your mind wander. Of all the movie plots and book theories, if you were dead, what would you be???
Posted by Molly at 1:38 PM No comments:

You can now enter the demented world of UglyArt by a dear friend Shyla. Check the links at the side of the page and enter at your own risk...the artwork that she does is one of a kind and definitely something to be seen. Thank you again to her for allowing me to share her work with the world!
Posted by Molly at 1:17 PM No comments:

As the idea for a blog about zombies came fluttering into my mind, my better half and brother were constructing a site for our home town ghost stories. While I cannot take credit for their idea I would like to thank them for encouraging me to follow through with a fantasy of mine...to see how many people are for or opposed to the idea that one day, if and when it does come about, the dead will walk the earth. I will share with the followers any theories that I may have of my own or any that the media has devoutly made a monetary gain from. I only hope that you will join me in my quest to obtain knowledge on the philosophy of the undead and add your two cents in anytime you feel necessary. ANY ideas are helpful and appreciated! If I do not cover, say, a favorite movie or video game theory or plot, don't hesitate to email me at zombiemolly.atrue@gmail.com. If your taste lies with the spirit world, feel free to visit http://ghostskansas.blogspot.com and show your support for my Kansas Ghost Stories family...
Posted by Molly at 7:01 AM 1 comment:

Anything is Possible. To any Zombie fanatic that may be out there...Do tell of any zombie theory, good or bad, as well as events that may be going on in your area to celebrate the undead. 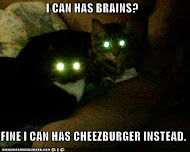 Oh How Dark The World Really Is 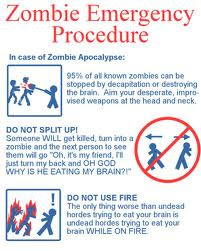